The Cazalets is a stunning and powerful drama of a large, disparate,
privileged family transformed by the tumultuous times in which they live.
Based on the popular novels of Elizabeth Jane Howard and adapted by the
award-winning screenwriter Douglas Livingstone the story is set between 1937
and 1947, against a backdrop of war and a veneer of British restraint and
respectability.

The story begins before the war at “Home Place,” the family’s large estate in
Sussex, where all the members are gathered for their annual summer holiday.
It becomes a permanent evacuation once World War II breaks out. Three generations
of Cazalets – grandparents, parents and children – migrate to the country,
together with their pets, servants and problems. Produced by Verity Lambert
and Joanna Lumley for the BBC. 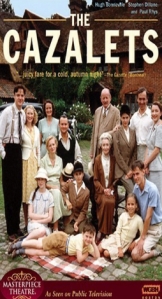